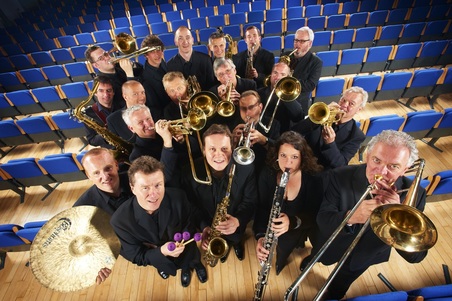 Artist Enquiry
"Such a versatile jazz orchestra ... a brilliant musical force"   The Telegraph

​"A truly wonderful band!"   Tony Bennett
One of the world's finest Jazz Orchestras, The BBC Big Band continues to delight audiences around the world through their broadcasts on BBC Radio and their live performances.  Probably best known for their performances on BBC Radio 2 and Radio 3 - the orchestra's music has also reached a huge global audience through its regular broadcasts for the BBC World Service, and via the BBC's online platforms

"They brilliantly continue the tradition of Big Band music.
As such they are important, as well as marvellous!"
Michael Parkinson

The BBC Big Band's hallmark is its versatility and there follows a selection of the shows the band are currently performing/touring:
The Entertainers - featuring Joe Stilgoe
The BBC Big Band are joined internationally acclaimed singer, pianist and songwriter, Joe Stilgoe, for a very select number of UK dates celebrating the great entertainers of the Twentieth Century.
The BBC Big Band has worked with all the greats, all the legends. This brand new show focuses on those giants of entertainment who, as well as being consummate musicians, loved nothing more than the very specific task of giving an audience a great time. We celebrate the music and lives of Sammy Davis Jr, Dudley Moore, Cleo Laine, Georgie Fame, Nat 'King' Cole and of course, Sinatra.
The Music of James Bond … & Beyond
The internationally acclaimed BBC Big Band take to the road to celebrate the music of the world's most iconic movie franchise, alongside a selection of music inspired by the genre. Featuring classic numbers including 'Diamonds are Forever', 'Thunderball', 'We Have All The Time In The World', 'View to a Kill', 'You Only Live Twice', 'Goldfinger' and, of course, the iconic 'James Bond theme' by John Barry ... all performed in the BBC's inimitable style.  Also included is music inspired by the film genre, including the likes of Mission Impossible, Austin Powers, and 1960s Avengers series.
The Nat King Cole Story
Featuring world-class live music, alongside projected archive images and footage - The BBC Big Band and their very speicial guest vocalist, Atila, celebrate the life and music of one of defining cultural icons of Twentieth Century.
The Big Band Divas - featuring Claire Martin OBE
An evening of feel-good music inspired by the most glamorous women in Jazz!  The BBC Big Band are joined by BBC Radio presenter and vocalist Claire Martin OBE for a celebration of the legendary leading ladies of Big Band, including Ella Fitzgerald, Billie Holiday, Peggy Lee and their contemporaries.

The Sound of Cinema
Inspired by some of the greatest movie sound-tracks, the world renowned BBC Big Band celebrate the ‘Sound of Cinema’.  Including classic themes from films such as ‘James Bond’, ‘Breakfast at Tiffany’s’ and ‘The Pink Panther’ – through to contemporary classics ‘Catch Me If You Can’ and ‘Mission: Impossible’ - performed in the BBC Big Band’s own inimitable style.

Frank & Ella
The BBC Big Band, accompanied by special guest vocalists, present a stylish evening of music in celebration of the music of two of the 20th Century's most iconic entertainers, Frank Sinatra and Ella Fitzgerald. Featuring timeless classics such as 'The Lady is a Tramp', 'That Old Black Magic', 'Mack the Knife', 'Someone to Watch Over Me' and 'I’ve Got You Under My Skin'.

Swing Legends
The BBC Big Band present an evening of world-class big band music, inspired by the finest swing bands and composers of the 20th Century: Duke Ellington, Count Basie, Artie Shaw, Tommy Dorsey and Benny Goodman and their contemporaries.  Enjoy the music that made them stars, such as One O’Clock Jump, Take the ‘A’ Train, Begin the Beguine, Sing, Sing, Sing and Opus One.

The Beatles Songbook
The BBC Big Band are joined by a 30-strong string, brass and woodwind section, plus vocalists, for a musical extravaganza celebrating the music of ‘The Fab Four’.  Fresh arrangements, unique interpretations, and stellar musicianship will abound as we celebrate the very best of The Beatles – including numbers such as Can’t Buy Me Love, Penny Lane, A Hard Day’s Night, Let It Be and Hey Jude - all performed in the BBC Big Band’s own inimitable style.

A Swinging Christmas
Featuring special guest vocalists The BBC Big Band present a swinging concert of festive favourites!  Featuring big band settings of favourite yule-tide numbers, such as Let It Snow, It's Beginning to Look a Lot Like Christmas, Santa Claus Is Coming To Town and Mel Tormé’s The Christmas Song – and much, much more!  Plus a selection of sparkling Big Band classics to warm you up on a winter’s night.

​In addition to the above, the band is available with a range of special guests.
One-off / themed concert programmes can also be developed/commissioned for special events.
​
Videos: