Jacqui Dankworth
'Just You, Just Me'
A Concert of Duets Celebrating a Century of Song 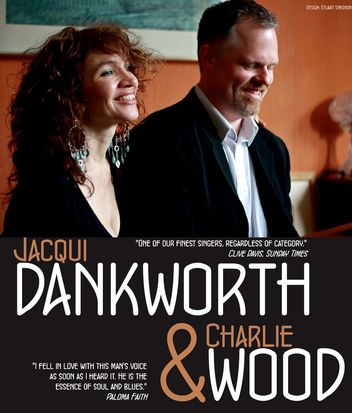 Artist Enquiry
“One of our finest singers, regardless of category”  The Sunday Times

'Remember the first time you heard Dylan, or Springsteen, or Costello,
or Waits?  Charlie Wood delivers that same jolt'  The Jazz Times
Multi award winning vocalist, Jacqui Dankworth, is joined by acclaimed American pianist-vocalist, Charlie Wood for a unique concert of duets celebrating a century of song.
​
Inspired by some of the great musical partnerships, such as Ray Charles & Betty Carter, Ella Fitzgerald & Louis Armstrong, Duke Ellington & Billy Strayhorn, George & Ira Gershwin and Roberta Flack & Donny Hathaway - the concert will feature numbers including: Alone Together, Autumn In New York, It Don't Mean a Thing, A Foggy Day, The First Time Ever I Saw Your Face and You've Got a Friend.

Jacqui Dankworth:
Given her musical pedigree – daughter of Dame Cleo Laine and Sir John Dankworth - it’s no surprise that Jacqui Dankworth is regarded as one of the UK’s finest jazz vocalists.  Although known primarily as a jazz singer, Dankworth was described by The Sunday Times as “one of our finest singers, regardless of category” and has collaborated with a diverse array of musicians and groups throughout her career including Marvin Hamlisch, Paloma Faith, Alan and Marilyn Bergman and Chick Corea. She is also an accomplished actress, having performed leading parts with The Royal Shakespeare Company, The National Theatre and in London West End musicals including Steven Sondheim’s Into The Woods.

Charlie Wood: piano-vocalist
Charlie Wood is a singer and keyboardist who covers all musical styles.  As a Memphis TN native, he grew up immersed in jazz, blues, and old-school R&B soul.  He was soon touring Europe and the US with blues legend Albert King, before being lured off the road by a residency at the King's Palace Café on Beale Street (the heart of the Memphis music scene, and officially recognised as the “Home of the Blues” by an act of Congress).  During their tenure at the Palace such musical luminaries as Rufus Thomas, B.B. King, George Coleman, Joey DeFrancesco, Alvin Batiste, Tony Reedus, Georgie Fame and many others stopped by to sit in and play with the band.

Now living in the UK, Charlie continues writing, touring and recording constantly. Recent shows have included the London Jazz Festival’s “Jazz Voice” at the Barbican, a live performance and broadcast on BBC Radio 2′s “Friday Night Is Music Night” at the Cheltenham Jazz Festival, and numerous other concerts throughout the UK and Europe.
'Had I not been sitting about three feet away from the action, I would have
suspected some kind of electronic trickery because the arrangement was so complex,
the timing so nifty and Ms Dankworth’s vocal control so exquisite"
The Observer

'I fell in love with this man's voice as soon as I heard it.  he is the essence of soul and blues'
Paloma Faith