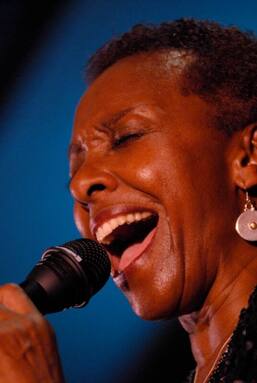 Artist Enquiry
“One of the ageless, evergreen singing stars …
as beautiful and talented as ever - she’s marvellous!”
Michael Parkinson

“Her style is a mixture of Broadway musical punch and jazz inflected subtlety ...
it is a blend that invites the widest possible audience”
The Guardian
One of the great British jazz voices, Elaine Delmar brings to life her acclaimed interpretations of the ‘Great American Songbook’ – including music from the pens of George Gershwin and Cole Porter.

Elaine Delmar has long been established as a singer of the very highest calibre. A British Jazz legend with the voice, looks and personality that have captivated world-wide audiences through her many stage and television appearances – including work on Broadway, The West End, as well as the UK’s finest concert venues, including The Barbican, The Royal Albert Hall as well as regular visits jazz venues such as London’s Ronnie Scott’s Jazz Club.

Whenever the jazz cognoscenti gather and the conversation turns to vocalists with class, it is never long before the name of Elaine Delmar is mentioned in appropriately respectful tones. Elaine has all the attributes that make a great singer: a striking voice, great technique, an individualistic ability to interpret the great songs, plus striking good looks, and a big personality.

Initially Elaine attained fame with her outstanding performances in the critically acclaimed jazz musical “Bubbling Brown Sugar” in London’s West End. These sell-out shows provided the impetus that took her to New York’s Broadway as one of the stars of “Jerome Kern Goes To Hollywood”.

Elaine is renowned for her classic interpretations of the great American songwriters such as Gershwin and Cole Porter. She also appeared in Ken Russell’s “Mahler”, and at the National Theatre in David Hare’s “A Map of the World.”
“Her style is a mixture of Broadway musical punch and jazz inflected subtlety.
She has the belting defiance of a torch singer at times and the knowing raised
eyebrow rasp of a blues artist, but also a hushed, confiding intimacy where it
is appropriate, it is a blend that invites the widest possible audience”
The Guardian

​Elaine performing live at the Royal Albert Hall as part of the BBC Proms: