Tune In to the Twenties
with Alex Mendham & His Orchestra 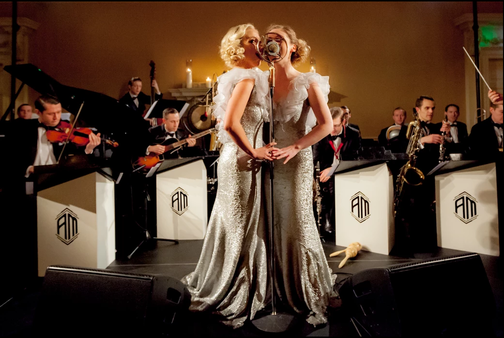 Artist Enquiry
'Alex and the orchestra are unique and incredible, there's nothing quite like them!'
Jonathan Ross - BBC Radio 2
A musical a visual celebration of the roaring Twenties - featuring the world-class live music, narration & projected archive images and footage.

Alex Mendham and his Orchestra are widely celebrated for their spectacular shows, combining jazz and swing music of the 1920s and 1930s with the modern energy and passion of their youthful years. They epitomise Hollywood’s golden era.  In this show, Alex and his stellar group of musicians explore the music of the Roaring Twenties, augmented by narration and projected images and footage.

When it comes to evoking the sound, charm and white-tie elegance of vintage Hollywood or the intoxicating speakeasy vibes of the Roaring Twenties, the Orchestra are without parallel: from their original instruments and pomade that slicks down their hair to their sharp tuxedos and spectacular dresses, no detail is overlooked.  Formed under the leadership and direction of charismatic musician and singer Alex Mendham, this hand-picked show orchestra  present a unique combination of dance band music and film scores from the Hollywood musical.

Highly in demand, the Orchestra has performed at iconic venues throughout the UK and toured internationally from the mountain resorts of Switzerland to palaces in Russia, wowing audiences with their displays of showmanship and grand scale visuals.
Sell out shows across the U.K and internationally include Cheltenham, Harrogate, Petworth House, Canterbury, Snape Proms and Wilderness Festival, alongside appearances across BBC radio and television.

Their latest album ‘On With The Show’, sees Alex Mendham & His Orchestra pay homage to the great songwriters George Gershwin, Cole Porter and many others.