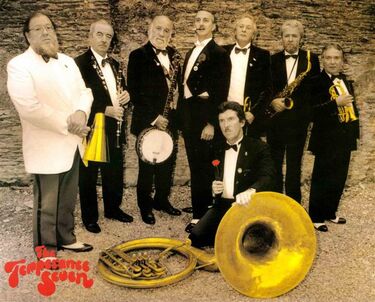 Artist Enquiry
‘Humour and rhythm combine to make The Temperance Seven a unique experience in upbeat nostalgia’
The Stage Newspaper
If one were to believe everything ever written about The Temperance Seven, the band would have been in existence for 120 years, incorporating about 300 ex-members - in fact, it seems that virtually everyone in Britain claims a relative or acquaintance who at one time or another has played in the band!

The band has in fact existed since 1957, when a group of jazz-loving art students decided to have a ‘blow ’ in the local hostelry and ‘hey presto’ The Temperance Seven was born.

The band quickly came to the attention of Parlophone Records producer, George Martin. Intrigued by the prospect of recording the band's unique sound, Sir George cleverly placed them around a single microphone in an attempt to recreate a recording from the 1920s.  The rest, as they say, is history ... the resulting single 'You, You're Driving Me Crazy' was George Martin's first Number 1 hit, and paved the way for The Temperance Seven enduring success.

The early 60’s was, of course, the heyday of the band - with two Number One hits and half a dozen other chart successes. There followed Royal Command Performances, appearances in three feature films, concerts at the London Palladium, seasons in Las Vegas and Hong Kong, as well as hundreds of radio broadcasts and TV appearances throughout the world.

The band has undergone various metamorphoses over the years but they continue to uphold the traditions of The Temperance Seven and carry the name successfully into the new millennium with great aplomb. The current orchestra, as well as faithfully recreating the old hits, has taken the repertoire into a new dimension, performing new arrangements and new compositions that would have made the original line-up’s hair stand on end!

All the members of the band are masters in the art of Hot Dance Music of the ‘20s and ‘30s played with true reverence for the arrangements, whilst maintaining a feeling of fun and spontaneity bubbling ever so close to the surface. The bandlove what they are doing and convey this sense of enjoyment to their audiences all over the world – music like theirs is timeless and universal, and can be enjoyed by anyone, anywhere.

Many bands have tried to imitate The Temperance Seven but none have got even close to recreating the band’s quite unique blend of expert musicianship and comic genius.